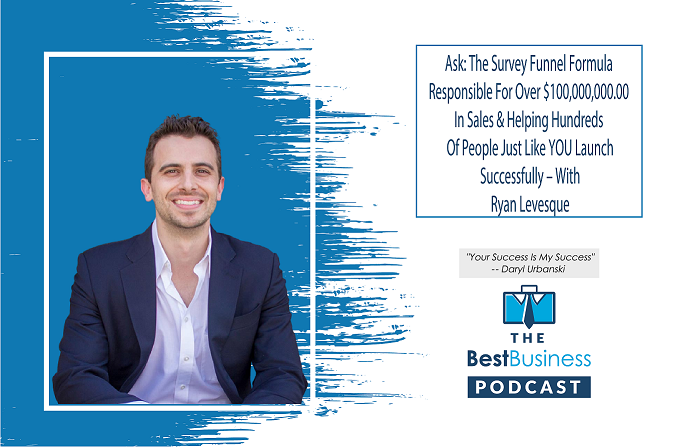 Ask: The Survey Funnel Formula Responsible For Over $100,000,000.00 In Sales & Helping Hundreds Of People Just Like YOU Launch Successfully – With Ryan Levesque

Today we have a very special guest - a returning guest actually.. And I’m really looking forward to catching up.

The guest I’m talking about is Ryan Levesque.. Last time Ryan came on our show he was just launching his new book “Ask”.. And now, just under a year later it’s featured as the #1 National Best-Seller in LA Times, USA Today, Publisher’s Weekly, Inc. Magazine, and featured by Entrepreneur Magazine as one of the 7 Must-Read Books for New Entrepreneurs.

In 2008, armed with nothing but a $450 laptop, an Ivy-League background in
neuroscience, and an insatiable curiosity to understand why people buy…

Ryan left a lucrative career on Wall Street and later in Shanghai to launch a multi-million dollar online publishing business that sells information and software using what’s now become the “Ask Formula” as taught in his #1 Best-Selling Book.

Ryan has used the Ask formula to help build multi-million dollar businesses in 23 different industries, generating over $100 million dollars in sales in the process.

He and his team offer training, consulting, and implementation services for entrepreneurs and businesses at all levels.

Today he’s here to continue where we left off, talk about this journey, how his survey method has evolved and drop a few gems of wisdom for all of us on how we can use surveys to grow our profits..