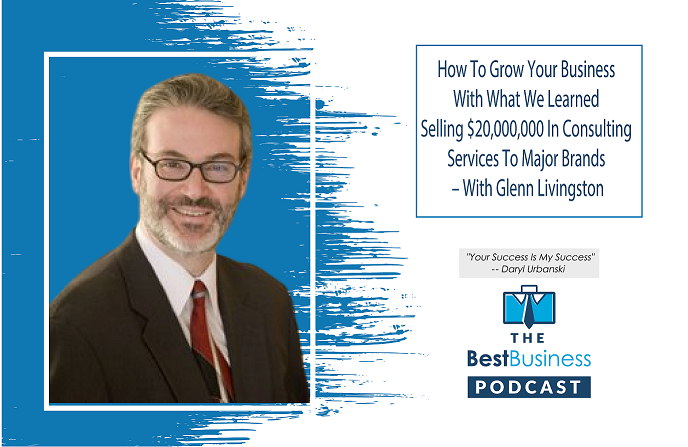 How To Grow YOUR Business With What We Learned Selling $20,000,000 In Consulting Services To Major Brands – With Glenn Livingston

I have a VERY special guest for you today.. A man who I have admired for years now. He’s influenced me in so-o many ways.. In fact, his material was some of the first I ever dived into back when I was a complete newbie at this…

I’m sure most of it went way over my head, but what a great introduction into marketing and the psychology of it all..

If you don’t know yet, I’m talking about the one and only Glenn Livingston.

In fact, I’m part of an online mastermind group Glenn is in, and people talk about him like the lochness monster or bigfoot or something… They say things like: “Did you see Glenn? He’s comes around here every so often. I saw him answer so-and-so’s question.. Next time he’s around I hope he answers mine for me.”

You’d HAVE to be to have sold over $20,000,000 in consulting services to major brands like those I mentioned.

Glenn ALSO managed to put himself very a couple MILLION dollars into debt with a business project which came to an abrupt halt right after 9-11. So after this, what does he do?

He goes and uses his system he’s been developing for over 25 years and enters 17 different niches all at once - and ALL PROFITABLY.

Not only this, but he then co-founded, helped build, and eventually sold a very well respected marketing agency.. He’s worked personally with over 1,000 clients in his 25+ years as a coach.

Helped countless of them develop a lucrative, fun, and fulfilling career... Including another guest of ours - Ryan Levesque - who took Glenn’s teachings and went and helped sell over $100 million dollars for his clients, internalizing Glenn’s system.

Glenn Livingston is the real deal. He’s also from a family of 17 psychologists and 3 social workers and is the reason why for years now I drink a tall glass of water first thing every morning. Ha ha ha..